There you are, it’s D-day. Today you are finally launching your very first Google Adwords campaign. Congratulations!

Now, if you want to build a performing campaign, it won’t happen just by saying it. The only way to perform on Adwords, is by running tests. And the only way to run efficient tests, is by having a very structured approach.

At Vio’s, we thought we’d be nice and give you on a silver platter our secret recipe for a top-notch Adwords structure. That’s us: we’re the good guys!

There are many ways to structure a Google Adwords campaign, but here at Vio, we have our own approach. First of all, you have to keep in mind that structure is the key to efficient on-going optimisation.

To start, you must know there are three different levels of information to organise in an Adwords campaign:

Adgroups are part of campaigns, and ads and keywords are part of adgroups. Basically, we have a structure that looks like this (thank you Wordstream): 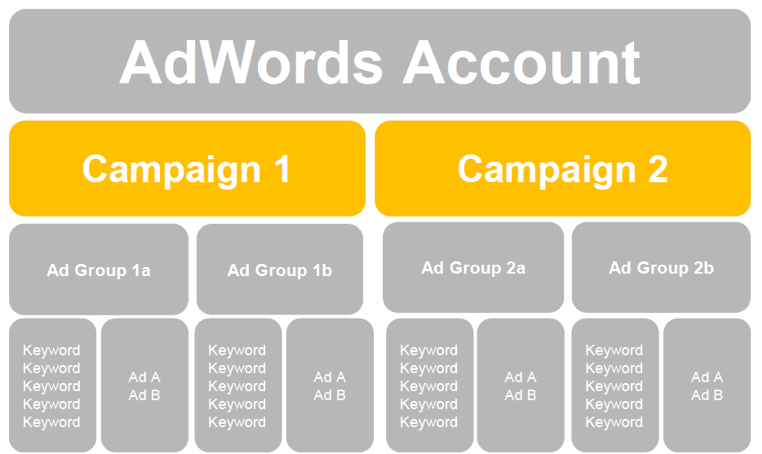 Each level contains a specific type of information and in order to properly optimize your account, you need to be cognizant of it. The next sections will give you the knowledge you need to get started.

Level 1 : How to structure your campaigns on Google Adwords

If you want to advertise on Google Adwords in at least two languages (like in Quebec, for instance), it is better to segment the language at the higher level, ie at campaign level. So, create one campaign per language. That way, you’ll be able to put your adgroups for that language under that campaign; meaning you already have a first level of information.

You should chose the name of your campaign according to the goal you want to reach. So, if you want to set up an awareness campaign in two languages, you should have two campaigns:

Therefore, if you have two languages and two goals – for instance, conversion and awareness – you will have four campaigns:

When you want to modify something at the campaign level (to optimise performance) keep in mind that you can adjust the following components:

The changes made to these metrics will cascade down to the two inferior levels, which means adgroups, as well as ads and keywords found in these adgroups.

Level 2: How to structure your adgroups on Adwords

In Adwords, adgroups are in fact groups of keywords sorted by themes. You’ll find your keywords and ads inside of these groups. One very popular approach, from the structure point of view, is to define which products or services you want to advertise.

The keywords should only be found in one adgroup. If, for example, you manage a transactional website, you should have one adgroup per type of shoes, backpacks or camping tents. 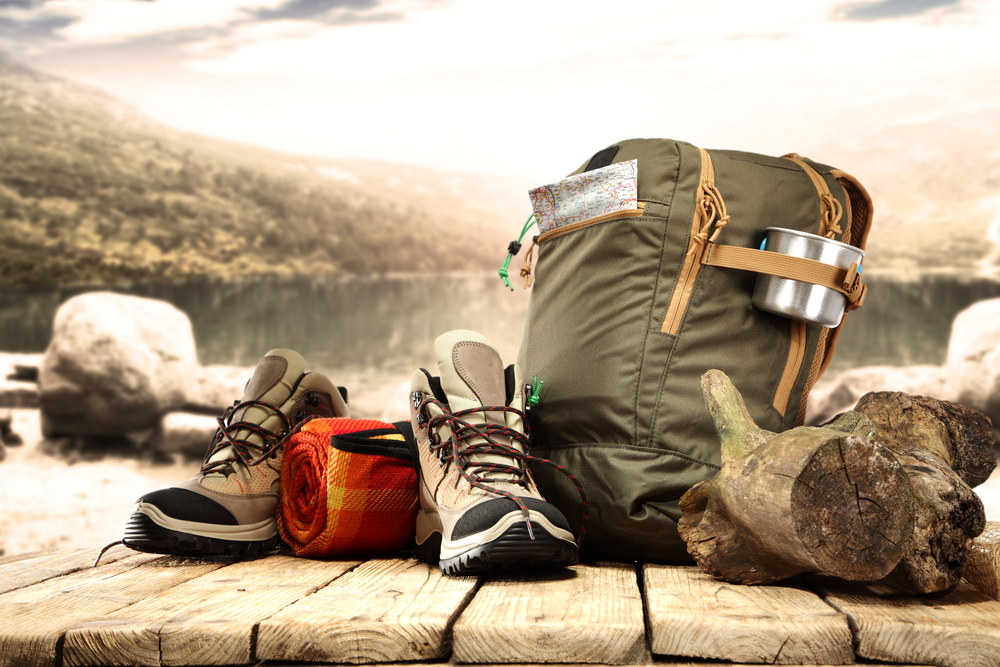 Avoid having too inclusive adgroups (like “sport gear” for example) in which you would have too diverse ads and keywords (for backpacks, shoes and camping tents). Neither should you have adgroups called “camping gear” including similar keywords, if not identical.

Google wouldn’t be able to choose the best ad to show to the Internet user, meaning your performance would drop.

If you only have one service to advertise, it is preferable to approach adgroups by themes instead of keywords. Try putting yourself in the shoes of the researcher and identify as many potential keywords as you can. Then, gather them together by themes.

And there you go, you have your adgroups!

Think about creating an adgroup for your branded keywords, including keywords such as your brand name, services, website, etc. This adgroup will likely bring an interesting amount of qualified traffic to your website.

Wordstream recommends to have approximately 7-10 adgroups for each campaign. Of course, remember that your impression volume will be divided by your number of adgroups. Thus, if you only have $10 to invest, do not create 10 adgroups…Otherwise, you won’t have an interesting enough impression volume to optimise the performance. Aim at a minimum of 1000 impressions per month, per adgroup (rule of thumb), and adjust the number of adgroups according to your monthly budget and chosen keywords.

Don’t forget to do this exercise for every language you want to advertise. English adgroups, for example, have to be found in your English campaign, and the same goes with the French adgroups (under the French campaign).

Note that it’s at the adgroup level that you define your maximum cost per click (CPC) – in order to avoid exceeding you budget for this specific adgroup. It’s also a way to invest more on certain adgroups.

If you are new to Google Adwords, we’d rather recommend starting with automatic bidding mode, so you accustom yourself to performance KPIs and have a better idea of how to realistically improve your business.

Don’t worry, even if you let Google choose your optimal CPC, it will never exceed your monthly budget at campaign level, one level higher than adgroup.

If you choose automatic optimisation, Google Adwords will adjust your CPC in order to bid higher for conversions that it considers you are more likely to close. When you’ll feel more confident with Adwords, switch to manual mode and adjust you maximum CPC to give more weight (more budget) to certain – more performing – portions of your campaign.

In terms of optimisation at the adgroup level, you have fewer options. Keep an eye on the comparative table for your different adgroups. Pause those that are less performant, according to your goals: lower CTR, less conversions, higher cost per conversion, etc. Create new adgroups to test new keywords that are likely to be researched by your target and to generate qualified traffic.

Possible optimisations for adgroups include:

Once you have created your adgroups, if you followed the exercise above, you now have a good list of keywords, ready to be tested.

Now, you shouldn’t only trust your instinct; it’s time for validation! Open Google Keywords Planner, to confirm a few important elements such as:

Don’t hesitate to test all the variations of these keywords (it can include 2 to 6 keywords, what is called “long tail keywords”).

Keep in mind that people sometimes make typos, ignore accents and operative words, and use abbreviations. Be creative: you have to put yourself in the shoes of the researcher. Think of their needs, the solutions they are looking for, the answers they want. 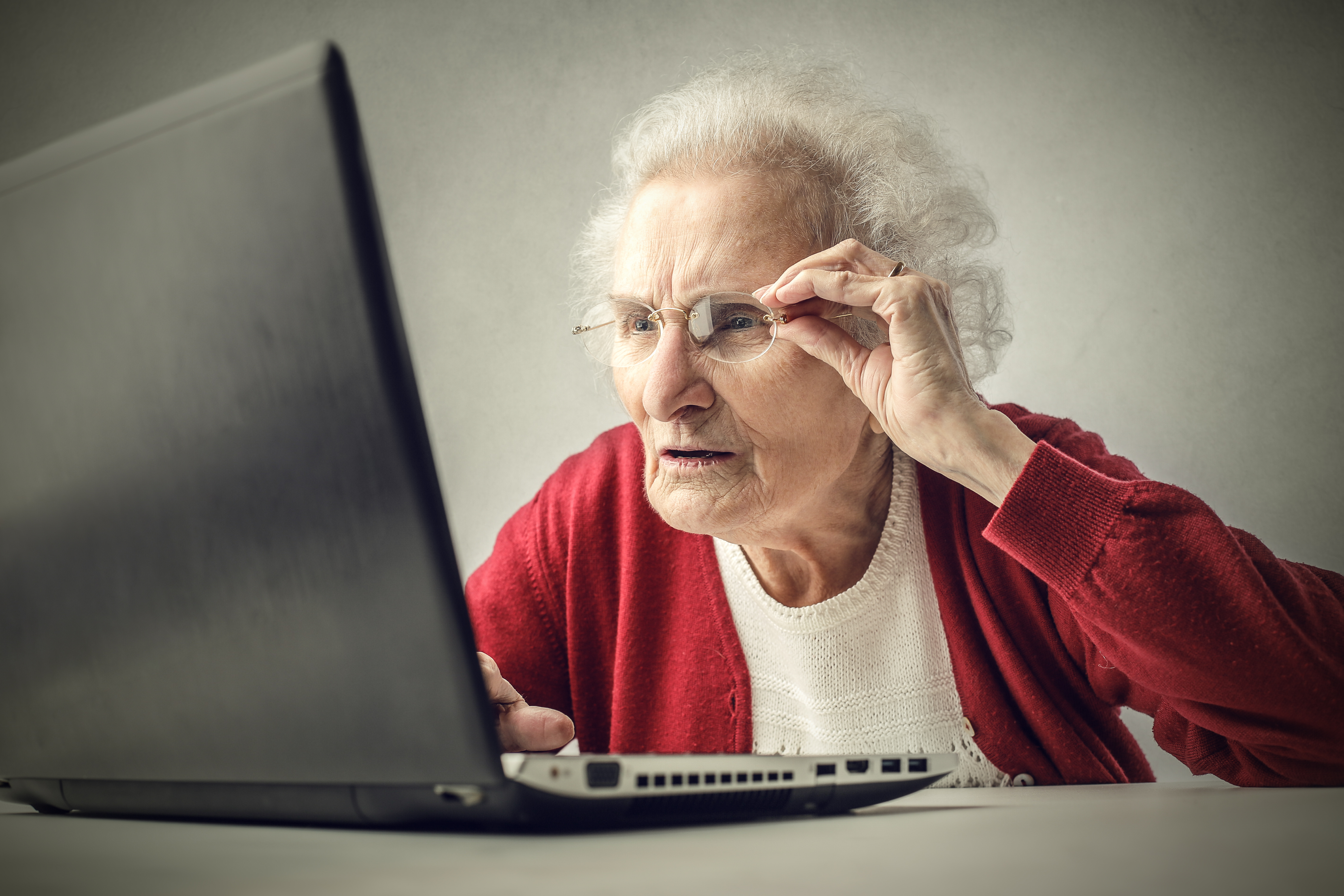 If the keywords are relevant, you can add them to the “Keyword” tab in Google Adwords. It’s simple: the keywords that you record here will be used by Google Adwords to show your ad. Then, if the target that researches is qualified (according to your targeting criteria) and if your budget is big enough to outbid the competitors, your ad will be on!

In terms of structure, it is preferable to have about twenty keywords per adgroups, more or less, in order to retain an interesting traffic. Again, avoid repetition when choosing keywords; you don’t want to become your own competition. Remember that, whenever you feel like it, you can pause some keywords (say when they don’t bring enough traffic, clicks or conversions, for example).

Think of adding negative keywords. Those are the keywords that are likely to be researched by your target, but bring unqualified/irrelevant clicks on your ads, and traffic to your website. For example, if you sell cut flowers, you can add “potted” (for potted flowers) as a negative keyword, to avoid paying for these visitors, when your services/products are not likely to be of interest to them.

When creating an ad, it is essential to run A/B test to define which ad content works better in terms of goals achievement.

Here, you should always verify, and not only trust your instinct.

When you run A/B test on two ad versions, 50% of people will be seeing version A and 50% will be seeing version B. At the end of the test, when you’ll judge you have enough traffic to draw meaningful conclusions, we invite you to run a statistical validation test, to determine if there’s indeed a significant difference of performance between the two ads.

Google will identify a winner at the end of your A/B test period however, keep in mind that it might not be as relevant as you may think. It is indeed a winner (best performance), but it doesn’t tell you if the performance difference is statistically significant. To make sure, you should always run a test using tools such as :  https://www.kissmetrics.com/growth-tools/ab-significance-test/

It is crucial to isolate one variable at the time when you test two adds.Otherwise, you won’t be able to identify which element positively or negatively impacted your performance. You should always have a structured A/B plan for your campaigns, and adapt your ads over time based on what you’ll learn from your past campaigns.

Here are a few examples of elements you could decide to test for your ads:

If you follow these best practices when launching your Google Adwords campaign, you’ll be sure to start on solid bases in the aim of reaching your performance goals.

Be strategic and methodical when optimising on Google Adwords: your performance will reward you a hundredfold!