Influencer. It’s a word that we hear more and more and that makes many sceptical stepfathers (especially mine) roll their eyes. And it’s funny because I was asked to write my first blog article on influencers a few days after I had to defend them in front of him. So here is a summary of my point of view, in the hope that it can help you understand the phenomenon and help you to explain it during your family dinners.

“What’s that, an influencer?”

Best way to start a debate: make sure the opponent understands what it’s about.

Even if the word is not yet very well defined, we can say that an influencer is a person who uses social media to post content that will be liked by people who will subscribe to it. The influencer creates and maintains a particular audience, faithful to its content, which appreciates its personality and trusts it. So, it’s almost like having a gang of friends. When you’re the center of the group.

From a strictly marketing point of view, “an influencer is an individual who, through his or her status, position or media exposure, can influence consumer behaviour in a given universe.” The influencer is the cool kid who has the nicest things and who one want to look like by having the same things.

Public figures (actors, singers, journalists, etc.) have long played the role of influencers for the people who followed them on TV. Now, when we say “influencer”, we think more of an ordinary person who, because he or she posts online, becomes known.

There are several types of influencers, which we will classify by level of popularity.

The levels vary according to the regions, the domain of influence and the number of influencers in this domain. For example, in Quebec literature, an influencer with 800 subscribers is considered a macro-influencer. In the United States, in the lifestyle world, it’s better not to think about it until you have 100,000 subscribers. What do you want, the Kardashians rule there as masters. 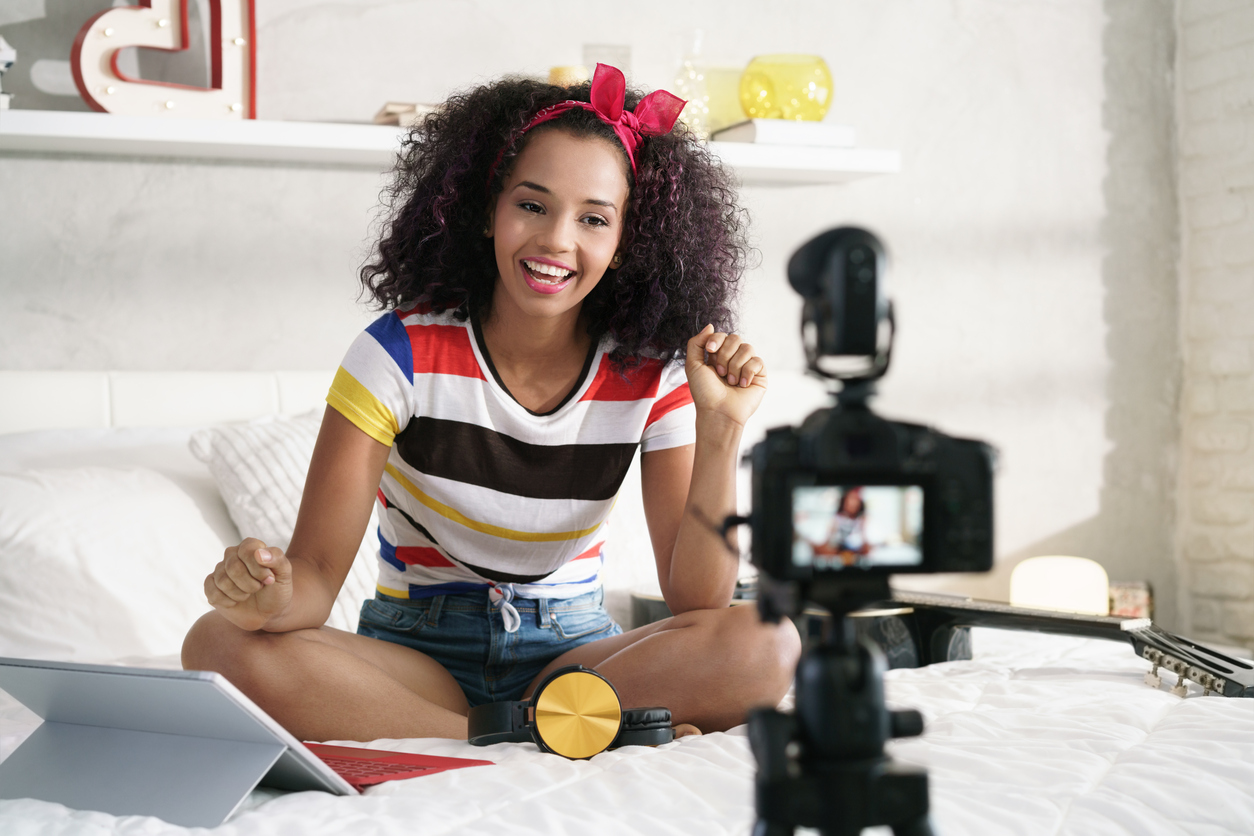 “Yes, but what do they actually do?”

But… they influence! No kidding, influencers HATE that they are called influencers (oops, I did it again), because they find the term meaningless. (Let’s face it, it is.) They say that their influence on their subscribers is a consequence, not a task or a goal, just like that of an actor or politician who is loved and that we want to imitate. (Okay, I challenge you to find one in the second category.)

Yes, but concretely, what do they do? Two things:

To make themselves known, they use different methods, including the 20 Easy and Effective Tips for Growing your Fanbase you have already heard about, such as following people producing similar content, making collaborations, using the right hashtags, etc. By increasing their number of followers, they get to know better their audience and produce content (blog posts, photos, videos) that will appeal to them.

Partial conclusion: it would be better to say that they’re creators of digital content. Borderline, entrepreneurs. That would be more accurate than defining them by the effect they produce.

“I want to know how influencers get rich. Who’s crazy enough to pay them?” 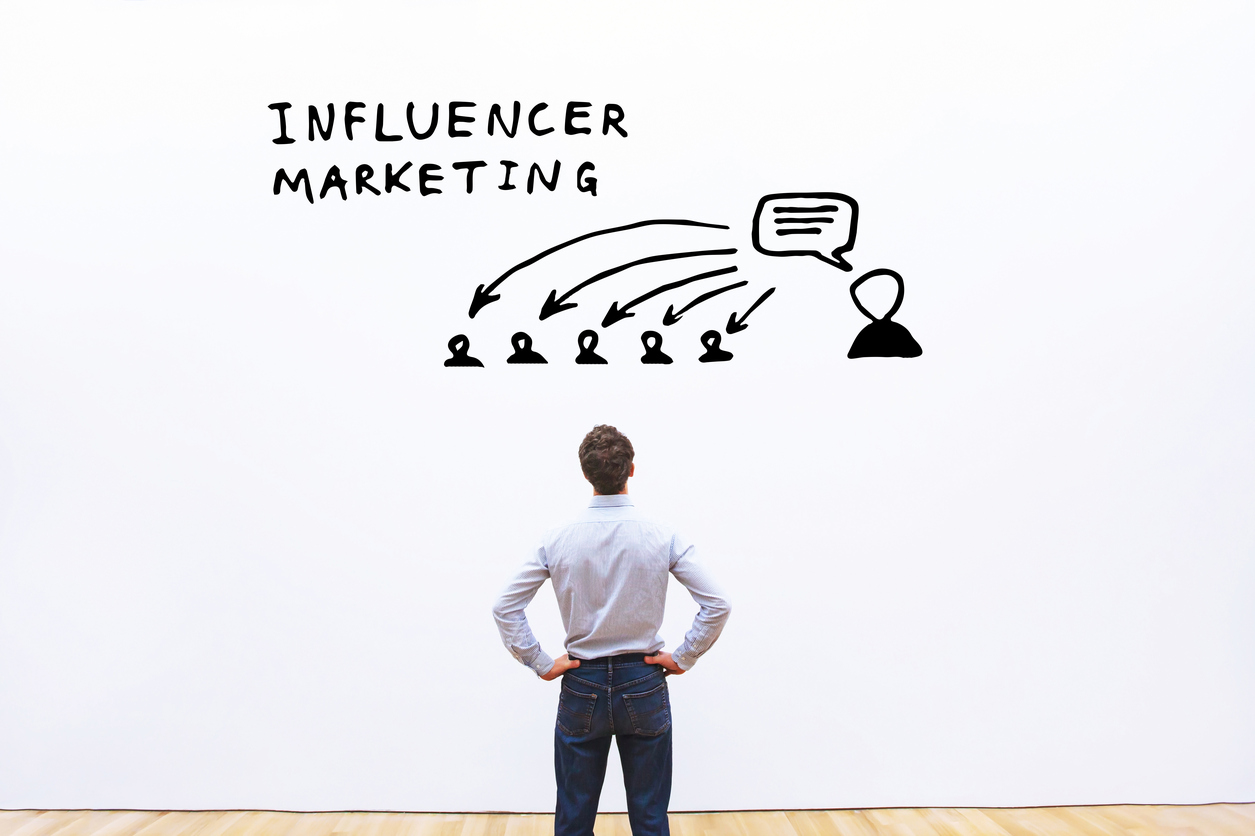 Unless they’re not full-time influencers or have a company of their own, influencers are self-employed. They’re approached by companies to participate in their influence marketing strategy.

And we’re going to calm down on the wealth. Yes, some influencers with many subscribers receive small fortunes for a single picture (we’re talking about amounts in the 5 or 6 digits). But there are many others who receive the product they promote and…that’s it.

But okay, we’ll look at why companies invest in one person rather than in an advertising campaign.

1. Influencers have a very targeted audience, perfectly willing to buy the product.

By putting an ad on Facebook visible to everyone or a sign on the A-40, you reach more people, but you also reach many people who are not interested.

2. Influencers can create the content of the advertisement for them!

Not only do they save part of the job (and again, it’s relative), but the promotion will be perfect for the audience it wants to reach: it’s created by a person who speaks to that audience. Every. Day. And even, several times a day.

The trust relationship between influencer and subscribers is super strong, because it’s based on honesty. And honesty is back in fashion.

4. It allows you to bypass Ad Block (for the smartest people who would have installed it).

A blogger I like, marketing strategist Frédéric Gonzalo, explains that the use of marketing influencers confuses advertising blockers, because they have difficulty knowing whether it is promotional or organic content (created for fun).

Partial conclusion: why should anyone have the right to receive a salary for their work, except influencers? I have just proven that companies need their services. We’re not going to use them without paying them, are we? (A quick reminder: slavery was abolished in 1865.)

“Well, anyone can post a picture. It’s not complicated.”

The personality of influencers and their content become one and the same thing. It’s through its content that the influencer manages to be loved, to convince people of its relevance and value as a human being, and not as an actor, singer, etc. And don’t say they don’t have any talent.

Partial conclusion: it’s easy to be competent in a field. It’s harder to get loved.

“In fact, they’re all really self-centered.”

Now, I’m the one who rolled my eyes.

Let’s face it: the tendency to take an interest in oneself is everywhere on social media. The organization of Facebook profiles in timeline is designed so that everyone has a space to tell their story. When we get on Facebook, the first thing we are asked is “What’s on your mind [insert your first name here]?” Social media encourage you to share your emotions, stories, photos: your profile is a story in which you are the hero, your friends and subscribers are the secondary characters.

Partial conclusion: why should influencers be more self-centered than we are? The only difference between them and us, is that they’re more seen.

…they probably have reasons to do it that you don’t quite understand.

You have to remain calm in front of the skeptical family member. Even if it’s difficult. Expressing frustration is destroying the argument.

Fortunately, the influencers came to my rescue with brilliant answers.

Does the Instagram post made by Marie-Lyne Joncas mean anything to you? I’ll show it to you, just in case: 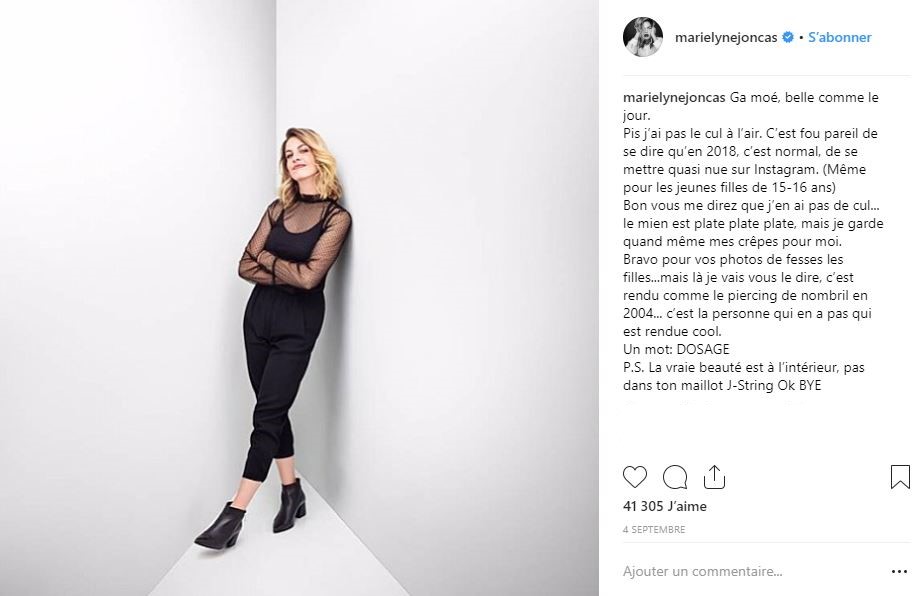 Yes, I give my attention (and yours) to Marie-Lyne Joncas and she’s not forgotten because of me. No one is perfect!

And the Instagram feminists have put their foot down. They didn’t insult anyone. They remained calm. But they made it clear that this was unacceptable.

Elie Duquet, for example, has posted a video online. She states that for some women, it’s an emancipation, a reappropriation of the image of their body. A way to have more self-confidence. #girlpower

According to her, it would be unhealthy just if those who pose do so for likes. If they think it’s the only way to be loved and have a lot of followers.

Elisabeth Rioux, who is often seen in a bikini, was already familiar with this criticism. It was discussed in an interview with Martin Latulippe, a month before Marie-Lyne Joncas’ post. She says she offers the type of content people want to see. Once she has obtained their attention, she takes the opportunity to convey positive messages of self-acceptance and body diversity.

Both of them point out that Instagram is not like television. On TV, we don’t choose what we are shown during the breaks of our favourite shows. On Instagram, we only see what we like. When it bothers us, we can press Unfollow. It’s like ghosting someone. Except no one will know.

Partial conclusion: it would be nice if there were a little more respect on social media. A little more understanding too. And, let’s face it: the girls in bathing suits on Instagram, if you look at them so much, it’s because they are beautiful. 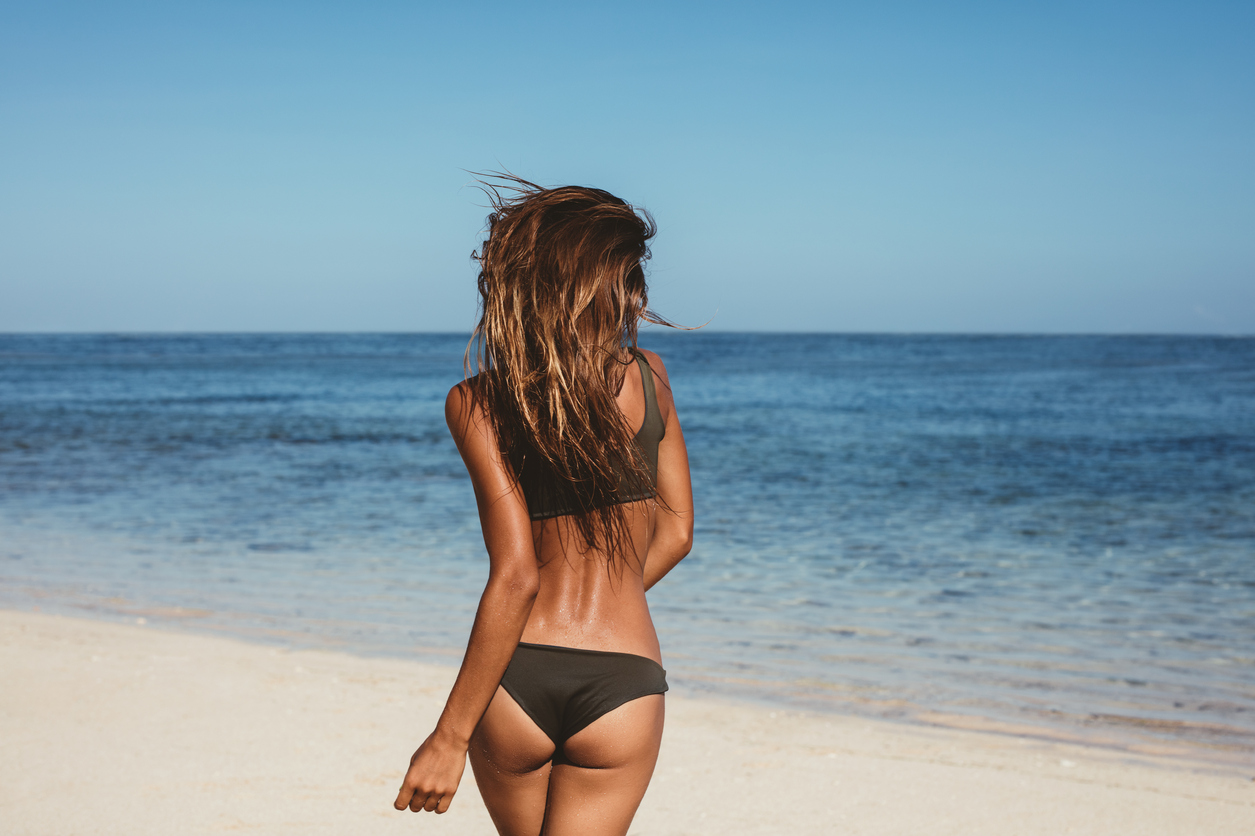 “If Instagram crashes tomorrow morning, the influencers are nothing.”

So if my stepfather loses his job tomorrow morning, he’s not much either, am I right? No, I’m not!

Let’s say a company closes its doors. Workers, left unemployed, renew their CVs, add new skills and apply elsewhere. The influencers will do the same; they will renew themselves.

Final conclusion: dear sceptics, don’t be so worried about them. One would think you’d start to like them.